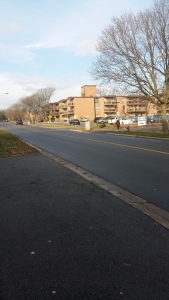 2018/10/4
It has been some time since I have written anything under this heading. Mainly because I went through a period of which I felt myself somewhat superior to my fellow residence and couldn’t be bothered to get involved in what I considered petty and mundane gripes and complaints. I found myself not suffering fools gladly for I believed them and their ideas to be stupid. It wasn’t until I had an argument with an acquaintance that I realized what had happened and thankfully snap myself out of that attitude. So with the dumping of that extraneous baggage I have returned in an attempt to getting more involved in the happenings around our little community of Longmoor.
Today at 1:30pm there was a meeting with representatives from Halton Housing in the Common Room which I attended. It is the first meeting with our new Tenant Services Advisor (Property Manager) who I will refer to as A. “A” isn’t exactly new as he was property manager shortly after I moved in. He left to run for the N.D.P. in Burlington. He lost so now he is back at his old job. The meeting lasted 2 hours and it was very informative and thought provoking. It was a relief to have someone who is in charge, in charge. A gave the impress that he was a straight talking no nonsenses person who was going to do his damndest to get things done within the confines of his authority. Like all civil servants he has higher authorities he must answer to. Our last TSA (see above) P. was a nice enough chap but seemed to lack the fire that is sometimes needed in that type of position. He and his assistant An. Have moved on to another building in Oakville. I forgot to mention that A. has an assistant Also, N. who seemed to be a nice young woman.
As I said the meeting was very informative and above all didn’t turn into the proverbial “Bitch Session” although there is always one who seems to think they know more than those in charge. Ours is named J. who is the epitome of everything that is bad when one thinks of “Blue Collar Workers”. About three quarters of the way through the meeting he started harping on a subject that had been discussed about 10 mins. before and when A suggested that id he had a complaint put it in writing. With that, J. got into a huff and left which by the way was appreciated by some of the people in attendance including yours truly.
The next meeting will be held just before Christmas and hopefully there will be some progress to be reported. In the mean while I will pay closer attention as to the happenings around the building and if of interest will write about them. Before I close I must admit that I was tempted to turn this into a personal bitch about a disagreement with H.C.H.C. and how I was treated but this is not the time nor the place.